As an animal breeder, one of the delights of your hobby is planning the next generation. Pedigrees are analysed, previous matings judged and physical attributes compared. By the time the current drop of kids is on the ground you will have planned the next year’s matings and perhaps decided to bring in new blood.

Invariably, the free will of one or more goats will cause me to rethink my plans.

Sometimes it works out well. Victoria was the result of a half-brother over half-sister mating, and she has been one of the best goats I have bred so far. That mating was not only unplanned, but I had also not intended for her mother to kid at such a young age. The whole episode of dealing with a buck so mad with lust that I had to have him shot after he had escaped every possible confine and bred every doe including his mother and his twin, was a cloud that really needed a silver lining. Victoria was that silver lining. 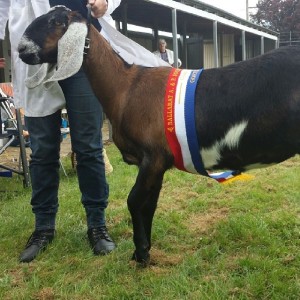 That year I had to acquire emergency contraception for two does. The following year a similar thing happened, although to a much lesser degree. My existing buck fencing was no match for motivated and resourceful new boy Jupiter, and I ended up needling two does again. One for being underage, the other for being the wrong doe in the wrong place at the wrong time.

A third doe ended up kidding at less than 12 months of age, after I managed to leave a gate open and the bucks got out again. I swear they could not have been out for more than twenty minutes, but apparently that is all they needed.

Ambika with her ‘surprise’ baby, Ajay

This year, with four matings planned, three very young females to protect, and an older doe who was meant to be retiring, I once again made my plans and started organising ‘sleepovers’ with the right bucks going to the right does. The stakes are a bit higher these days, with my old vet no longer treating ruminants and thus no easy access to emergency goat contraception.

So when I got home one day to find my senior buck Tazzy out with the girls, I thanked my lucky stars that the one doe in season was the one I was planning to breed to him anyway. Even if I didn’t really want to do it for another few months.

After Ambika’s surprise kidding as a child bride last year I have come to accept that unplanned breeding of very young does is something that happens to even the most experienced breeders. It might not be ideal, but it shouldn’t be a disaster. Juno is a broad-hipped, deep bodied kid, and she will be well cared-for during her pregnancy and supervised during her kidding.

To date, Victoria and Meredith have been bred to Jupiter, and both look to be in kid with due dates in July. First-timer Juno is still a bet each way after her encounter with Tazzy, but if she is not in kid she will be bred to FitzWilliam for a late kid. This will be a test-mating for both these youngsters, with Juno’s future riding on the quality of her udder, and the future endeavours of Fitz riding on how he crosses with selected does.

Victoria and Meredith, in kid to Jazzy Jupiter, due in July.

Ambika has been bred to Tazzy’s son Zeus, who will hopefully produce a kid with a bit more stretch than last year’s Tazzy/Ambika cross who was very nice but not really long enough in the body.

Then there is Rianna. After being diagnosed with a staph infection in her udder, Rianna was to be retired. She has contributed two excellent daughters and a son who has been retained. And a few days after Fitz’s arrival I came home to find that she had liberated him from the quarantine pen and put him in a corner behind her very in-season self. She has not come back in season since.

At least if Juno doesn’t have Fitz babies this year, Rianna probably will.

So in the end I may end up with five goats to kid; three in July and two in September. Not the staggered season I was hoping for, but at least there have been no major disruptions.

Of course, getting the matings right is only the beginning. I am looking at somewhere between five and twelve kids, with the potential combinations of buck kids and doe kids, singles and multiples and colours and patterns beyond my comprehension. Each season I can only work with what I am given, and some years it works out better than others.

This year no buck kids will be kept. Every single buck kid will be wethered. And doe kids from some matings will be sold.

Maybe this will be the year that a doe blesses me with more than one doe kid. Maybe I’ll end up with a paddock full of potential wether meat. All of that is the luck of the draw.

Maybe once again I will be left with the sense that the goats have got it right. 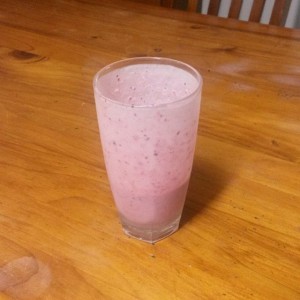 I don’t get sick often. At least, not in the way that ordinary people get sick. You know, head colds and tummy bugs and assorted communicable viruses. They generally leave me alone.

No doubt a big part of this is due to my yearly ‘flu shot. But I also attribute a significant part of my robust immune system to what I call my Purple Milkshake.

It is actually a kefir smoothie, but with a fair whack of berries in it to give a purple hue. There was a joke in primary school about a kid who wanted to know what a Purple Milkshake was, and went on a perilous and convoluted journey to discover the meaning only to be run over by a car just before reaching his destination and die without ever finding out. It was one of those jokes designed to leave you forever wondering what exactly a Purple Milkshake was, when the reality was that it was just made up to annoy people.

My Purple Milkshake is the answer to a question you never thought to ask. It is the fuel behind my super powers, the reason why I am not dead yet.

Depending on how much I put in it, it weighs in at around a fairly hefty 700 calories. That is the equivalent of two and a half Mars bars or over a third of an average person’s daily requirement. I have one most mornings.

The key ingredient is kefir, which I have spoken at length about. I also add a banana (the bigger the better for a thick smoothie), about 2/3 of a cup of mixed berries, about 100g of full-fat home-made yogurt and about a tablespoon of wheat germ or oat bran.

Of those five ingredients, four of them are superfoods and yogurt is also widely accepted as being pretty healthy. There is plenty of tryptophan, vitamins, minerals, electrolytes, amino acids, essential fatty acids and even live bacteria for gut function in this smoothie.

And it is filling. A smoothie for breakfast will keep me going through to 2pm when I finish work, and see me comfortably through an after-work swim or run. If I am busy, it will fuel me until dinner time. The combination of natural sugars and a good dose of carbohydrate and protein prevents a mid-morning sugar crash and keeps my concentration levels up. I don’t feel the need to snack.

It also, apparently, re-hydrates me. Milk is great for helping with hydration. It will invariably necessitate a 10am bathroom break, though.

There are many variations on the smoothie concept, including mushed vegies and dairy-free options. But with a wealth of home-grown dairy products in my fridge, I might as well make the most of them.

Sometimes, if I feel like something different for breakfast, I will do a basic smoothie with just kefir and frozen berries as a breakfast drink and to make sure I still get all the kefir and berry goodness.

It is a quick breakfast for a busy person, just chuck all the ingredients in a big cup and whizz it with a stick blender. Also great post-workout or as a pick-me-up when I don’t really feel like eating. You need to respect the level of nutrient density it contains and not go overboard, but as a part of a balanced diet the Purple Milkshake can give you a lot of what you need to stay healthy and active.

So often we buy simply for the sake of buying. For the feel-good buzz of bringing home and unpacking new stuff.

But then afterwards maybe we feel a bit dirty. We wonder if perhaps the money could have been better spent elsewhere.

Don’t get me wrong, I love getting new stuff. Some nice fluffy slippers for winter. A kitchen gadget that revolutionises my cooking. Even a nice new top that makes me feel good when I go out.

When I worked in retail I was put at the head of the Christmas crew. We sold pallets and pallets of cheap, nasty, plastic stuff. Things that people could absolutely do without. All of it optional. All. Of. It. Most of it pointless and disposable. It polarised my view of consumerism and changed how I look at Christmas.

I introduced my concept of a ‘Militant Hippie Christmas’, where every gift was from a sustainable source or created something useful and ongoing. Pots of herbs, hand-made stuffed animal kits. It got a few people thinking.

These days I buy for my close family only. I make home-made hampers for extended family, to a varied reception. I use Christmas as an opportunity to buy something significant and wanted for my partner and children. I probably spend the same amount of money as I used to, but less of what I buy ends up in the bin before the next Christmas.

As a neo-pagan, I make Christmas palatable as a celebration of family and abundance. This keeps things easy for me in a society that pretty much revolves around a Christian festival and gives me a bit of a platform to comment on the inherent consumerism.

I’m not saying don’t buy stuff. People buying stuff is what makes the world go ’round. Just don’t be a slave to it. It is much easier to appreciate something that will keep on giving, and you will find more value in something useful. This value will be greater still in an item that you get a lot of use and enjoyment from.

Take time to find the right product at the right price. When I needed new ugg boots I waited and looked at my options. I could have lashed out and spent a lot on top-of-the-range slippers, or spent $10 on an imported pair from a discount store. In the end I bought an Australian brand at a great price.

If you think before you spend, it you ask yourself what value a purchase will have to you, you take a bit of power back from the advertisers who are telling you what to buy. Don’t let advertising sell you things you don’t need. Seek out your own information and learn the difference between being a purchaser and a consumer. Commercialism makes money out of making people think they need stuff. This is unethical. Don’t be one of advertising’s little bitches.

When I gave up commercial TV, I took myself out of reach of the media. I have no idea about current trends. I don’t receive junk mail. I think that disconnecting from the media drip-feed is starting to alter the way I think. It has created a space to identify my own desires and requirements. It has allowed me to differentiate what I actually want and need from what we are told to want and need.